First download the Eclipse IDE for Eclipse Committers - used to be called Eclipse Standard - see this bug for chit chat.

Run it, New Project > Plug-in Project. Apart from trivial choices why does it not have eclipse version bigger than 3.5 ? 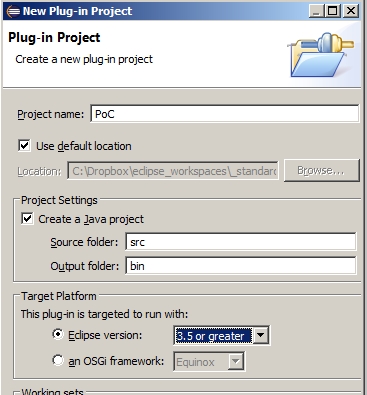 Next the plugin content - official docs - in particular “Adding API Analysis to the project will enable static analysis of API usage from the new project”.

Next you get at the project templates - I had some difficulty finding them. Choose and template and then - git (TBC)

Tutorials - there are a gazillion out of date tutorials but for e4 see:

And messing with eclipse code (I will be blogging on this separately soon):

And some fun: How to become an Eclipse committer in 20 minutes and fork the IDE